Information about the Badí' calendar

The Badí' calendar, like the Common Era calendar most widely used in the world, is a solar calendar tied to the sun’s position relative to Earth, the length of a year is based upon the amount of time it takes Earth to orbit around the sun (365.256363004 days). The structure and usage of the calendar were revealed by the Báb and Bahá’u’lláh, the Twin Manifestions of the Bahá’í Era. Currently the calendar is used by Bahá’ís to determine the correct dates and times for their Feasts and Holy Days throughout the year.

First Day of the Year

Key Facts about the Badí' calendar

‘Abdu’l-Bahá elucidated on certain aspects of the calendar and clarified that of the 11 Holy Days that Bahá’ís must mark, work is only forbidden on the nine that pertain to Bahá’u’lláh and the Báb.

Shoghi Effendi made further clarifications on the calendar and introduced its usage to the Bahá’ís of the West. However this use was been left tied to the Gregorian calendar pending certain decisions that remained to be made by the Universal House of Justice.

In a letter dated 10 July 2014 the Universal House of Justice announced these decisions, to take effect from 172 B.E. (21 March 2015). Two key decisions were announced, the place on Earth which would be used as the point of reference point for the astronomical start of the year, and how the Births of Bahá’u’lláh and the Báb, which fall next to each other on the lunar calendar and are intended to be celebrated as consecutive twin anniversaries, could be placed in the context of a solar calendar. The Universal House of Justice also announced some corrections to the dates on which certain Holy Days are celebrated, in accordance with the proper implementation of the Badí' calendar.

The First Day of the Year 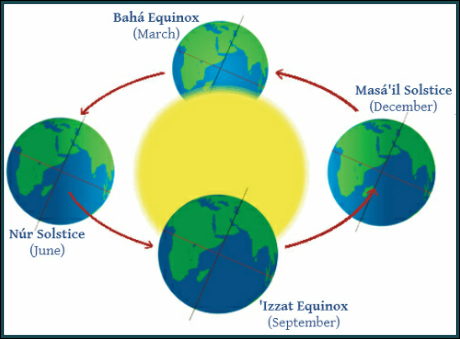 Solar calendars are based on the position of the sun relative to Earth, and this is effected by both the rotation of Earth on its own axis (creating day and night) and the planet's orbit around the sun.

Because Earth tilts on its axis the position of the sun relative to the equator (and the height the sun reaches at noon) change throughout the year. For half of the year the sun brings spring and summer to the northern hemisphere before crossing the equator to provide the extra heat to the southern hemisphere for the remainder of the year. The moments when the sun is furthest from the equator are called solstices, these are the longest and shortest days of the year. The moments when the position of the sun crosses the equator are called equinoxes, these mark the starts of spring and autumn.

Bahá'u'lláh stated that "The Festival of Naw-Rúz falleth on the day that the sun entereth the sign of Aries, even should this occur no more than one minute before sunset."

Aries is an astrological sign of the zodiac, these signs are based on twelve equal segments of the path that the sun takes relative to Earth, starting with the sign of Aries when the sun is at angle of zero degrees and rising north, which is the moment of the Bahá equinox.

At any given moment in time, what your clock says and where the sun sits are dependent upon your physical location on Earth. At the moment of the equinox it will be daytime in some of the world's cities and nighttime in others, and on opposite sides of the international date line the day of the month will also be different. In order to fix "the day that the sun entereth the sun of Aries", the last sunset in the city of Tehran (Bahá'u'lláh's birthplace)  before the Bahá equinox is considered to be the start of the day of Naw-Rúz in that location, and that same day is the Festival of Naw-Rúz around the world, wether the equinox falls on that day, in that location, or not. 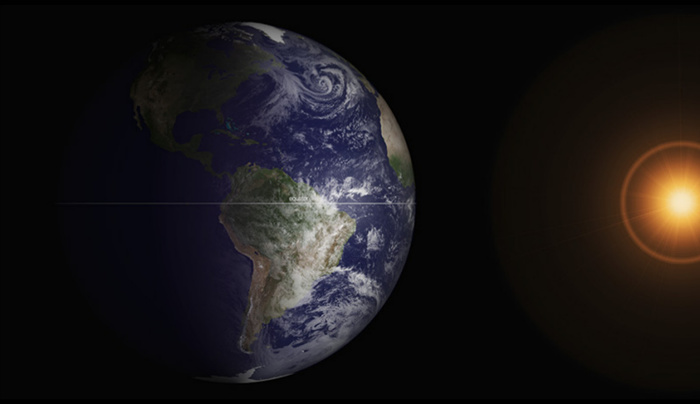 The image used in the site header, and shown more fully to the left, is published by NOAA and shows the Bahá equinox from space at the start of 172 B.E. (March 2013). The position of the sun is moving northward over the equator, which has been drawn on, horizontally, across Earth’s centre.